The Pi has just received massive speed boost.  And the extra cost of the Pi 2 is…wait for it……£0.  Yes, for the same price you get this turbocharged version of the Pi B+, boasting a new Broadcom BCM2836 900MHz quad-core system-on-chip with 1GB of RAM – all of which will drive performance “at least 6x” that of the B+.

Raspberry Pi foundation head Eben Upton said: “I think it’s a usable PC now. It was always the case that you could use a Raspberry Pi 1 as a PC but you had to say ‘this is a great PC in so far as it cost me 35 bucks’. We’ve removed the caveat that you had to be a bit forgiving with it. Now it’s just good.”

We are pleased that there are no visible changes to the Pi this time, so all of our lots connect exactly the same as the B+ did. The Pi 2 uses the BCM2836 SoC, which according to Upton has been in development for a couple of years. 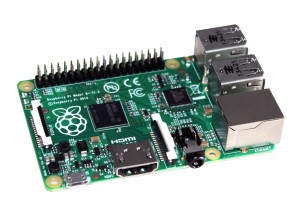 It’s “very, very similar” to its predecessor – the BCM2835 – but with four cores and “a little tweak to allow us to address the gig of RAM,” he explained.

The new BCM2836, however, contains four 32-bit ARMv7 Cortex-A7 cores with 1GB of RAM (and the same VideoCore IV GPU).

We’re looking looking forward to receiving ours shortly and we’ll see how it shapes up.  Eben Upton’s view on the defining the 6x performance increase over the B+, is “That’s one of those things where you ask ‘how do you put a number on it?'”

Eben Upton, a chip architect at Broadcom, continued: “Where the ARM11 starts to fall down really, particularly with the kind of small caches we have on the BCM2835, is when it starts to run actual applications. I think we ran SunSpider [on the BCM2836] and even though that’s going to be a single threaded benchmark, that was something like 3x performance just on a single core.

“So we figured, what’s a defensible number, and [six] is the number that comes out of SysBench. We just wanted to have an answer when someone asked ‘Where did you come up with that?'”

Eben Upton predicts dabblers in image processing will benefit “There are a lot of people who want to do computer vision things like OpenCV. You can optimise OpenCV pretty well to run on the DSPs that are in Pi 1, but in the end there’s just no substitute for just lots more CPU performance.”

Would you want extra CPU performance is like saying would you like a higher wage. There is never a problem with having a faster CPU unless it’s beyond your budget.  Fantastically, the Pi 2 will sell at the same price as the B+ – $35 – but the latter will live on.

Eben Upton says: “We’ve sold something like 60 or 70,000 freshly manufactured Bs since we launched the B+, because, for example, industrial customers don’t want to move on. I think that although the Pi 2 and the B+ are going to be the same price, there will be a bunch of industrial customers who, for a variety of reasons, will just stick with the B+ because they’re comfortable with it.”

The Pi 2 is already on sale and is still made at Sony’s plant in Pencoed, South Wales.